An Interview With a Playboy 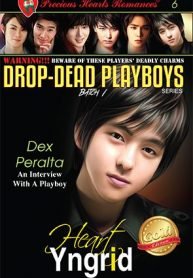 Jenna’s hatred towards Dex Peralta started since he has played with her because of an interview she has to get from him for their campus paper. He was tagged as the “campus king.” He was their university’s varsity team captain and the most infamous bad boy and campus heartthrob at the same time.
He does not want to be interviewed by her. That’s why she has to make a move to make him agree to take the interview. She has to change herself so he’ll take notice of her. But that seems to be the root reason for him to play with her heart.
Fast forward to present time. Jenna was now a media person. And it seems that history is repeating itself. With Dex’s comeback to basketball scene, she has to take an interview with him, again. But she has learned her lessons. This time, she would not let her heart be played by Dex again.
Note: An Interview With a Playboy is a novel from the Philippines originally written in Filipino (Tagalog).

Big Brother, Please Save Us!

The Star of Depravity

My Sister Told Me to Give Up My Fiancé (LN)