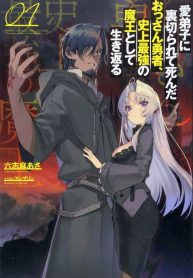 An old hero who died after being betrayed by his beloved disciple comes back to life as the strongest demon king in historyManadeshi ni Uragirarete Shinda Ossan Yuusha, Shijou Saikyou no Maou toshite Ikikaeru愛弟子に裏切られて死んだおっさん勇者、史上最強の魔王として生き返る

Freed, a middle aged hero, defeated the Demon King after a deadly battle.
However he is killed by his beloved disciple who tried to monopolized all the credit.
Immediately after that, Freed somehow came back to life as the new Demon King.
The Demon King’s castle is on the verge of being overrun by the oncoming heroes.
His second-in-command, a beautiful girl from the demon tribe, and his subordinates try valiantly to protect him.
In order to save them, Fried unintentionally ends up fighting against the heroes.
The former hero becomes the most powerful Demon King in history, and a great counterattack to save the demon world on the verge of destruction begins…

For a Prosperous World