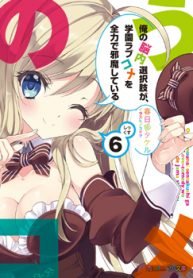 Kanade Amakusa is a high-school student who is suffering from a curse called “Absolute Choices” (絶対選択肢, Zettai Sentakushi). This curse requires him to select an action from a list of two or three options that appear before him at any time, and has no control over what choices appear. Many of them are weird or perverse and as a result, the curse has tainted his reputation with his classmates and other people around him, making his life very difficult.
However, one day, a choice he makes on his way home from school causes a mysterious, beautiful young girl to fall from the sky. Amakusa discovers that she was sent from the God World to assist him in completing a series of missions given to him directly by God himself. After completing these missions, the “Absolute Choices” curse will be lifted from Amakusa; but should he fail in completing any of the missions, he will be stuck with the curse forever.

The Daughter of Evil

The Spoiled Daily Life of the Villain’s Mother

My MCV and Doomsday

The First Half of My Life