The Creation Alchemist Enjoys Freedom -If I Am Exiled From My Hometown, I Can Make Magic Items With Transcendent Effects at the Knees of the Demon Lord- 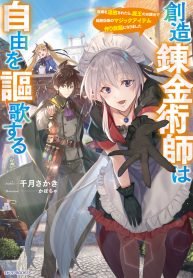 The boy, Thor Regus, who lived in the empire, is banished to the territory of the Demon Lord by the hands of his father, the Duke.
The reason was that he could only use [Alchemy] and didn’t have any combat skills.
The empire was a military country, and those without combat skills were discriminated against.
That is why the Empire decided to make him a hostage and sacrifice to the Demon Territory.
This is a story about an exiled boy who transcends Empires and Heroes and transforms the Demon Territory into a civilized power.

All My Girlfriends Have A System

Peace and Equality in an Ideal World

Elysion Online ~The Dragonewt and The Summoner~