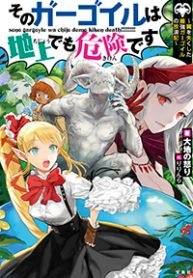 A Dangerous Gargoyle even on the Ground~ The Wandering Saga of the Strongest, Wingless GargoyleSono Gargoyle wa Chijou demo Kiken Deathそのガーゴイルは地上でも危険です～翼を失くした最強ガーゴイルの放浪記～

For 1,500 long years since the Demon King dominated the land, Albert the Gargoyle lived the life of a s*ave. But when his master is killed, he regains his freedom, and is now unrestricted to travel the world to his utmost desire.
In the beginning, Albert had lost his wings because of the harsh duties given to him for the past 1,500 years, but he has become one of the strongest beings alive because of it, despite being a Gargoyle.

Forcefully Doting On You

So What If It’s an RPG World?

Faking an Honest Act to Eat You Up