The Undead King of the Palace of Darkness (WN) 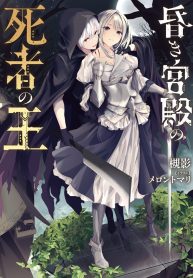 I don’t want to die. I want to be free. To that end, I shall….reconcile myself to the fate of becoming a “monster”.
A strange disease that racks up one’s entire body with intense never-ending pain, until the person slowly withers away and eventually dies. After a few years of braving through the pain, the boy is in no luxury to even feel despair. With nary a soul to tend to him, he breathes his last.
The next time he opened his eyes, the boy had become an “Undead” of the lowest rank through the power of an evil Necromancer.
The boy rejoices at having his earnest desire fulfilled, which is a body that will never feel pain. However, he realizes that he is still under someone’s control and how it was no different from when he was cooped up in the hospital ward.
But the world would not leave alone the boy who only wished for peace.
The Necromancer who revives the boy from the dead, names him “End” and attempts to gain control over him.
The Undead Knights, lay their lives on the line to persistently chase after and annihilate the beings of the darkness.
With countless monsters under their command, the Demon Lords rule over their own lands while they all contend for ultimate supremacy.
The motivation being survival and freedom. The requirements being caution and power.
This is the tale of the cowardly King of the Undead. In his pursuit for freedom, he heads into battle and turns tail at times. He knows when to fear his opponents and when to waver in his decisions.

A Round Trip To Love

This Time, I Became the Fiance of a Duke’s Daughter. But She is Rumored to have Bad Personality, and Ten Years Older